History   of   the   Partnership   Program 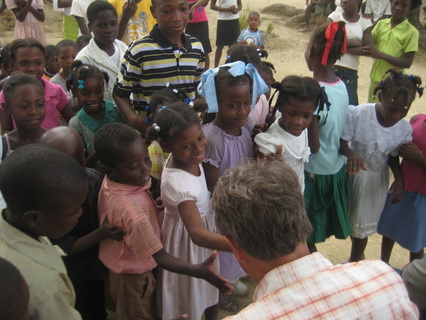 In the late 1990s both National Cathedral School in Washington, D.C., and St. Matthew’s Parish School in Pacific Palisades, California, were part of a U.S. group that helped build St. Paul’s School in the village of Caracol located in the “Centre” region of Haiti.

Following the January 12, 2010, earthquake in Haiti, the NAES Partnership Program became a much needed support to the Haitian Episcopal Schools, many of which also served as sites for medical, food, and water assistance within the wider community.  St. Matthew’s and the National Cathedral School were reconnected as U.S. partners in support of St. Paul’s School in Caracol.  Although our partner school was not affected, the result of the earthquake was a greater demand for the already limited resources.  Refugees from Port-au-Prince returned to the countryside where they needed food and shelter.  The first place they turned was the churches and the schools.

NAES continues to urge its schools to enter into partnerships either alone or in concert with other Episcopal schools and institutions:

“The need for the mission and work of Episcopal schools in Haiti, and for supportive partnerships with Episcopal schools and organizations here in the United States, remains important and critical to the longterm rebuilding of Haiti as a whole.”

According to NAES, "over 250 Episcopal schools in Haiti provide quality education to children of all faiths and remain an anchor of stability and progress in the communities they serve. Many schools were damaged and destroyed during the January 2010 earthquake and remain in need of rebuilding. Others have needs for, among other things, teacher salaries, student tuition, building improvements and expansions, basic supplies, and feeding programs.  The schools are seeking long-term cultural and prayerful relationships and financial support through the Partnership Program."
Proudly powered by Weebly